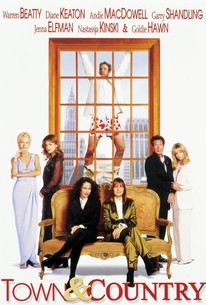 Afflicted with extensive re-editing and re-writing, this sex comedy feels confusingly choppy. Also, the main characters are so wealthy and privileged that it's difficult to feel sympathy for their problems.

This long-delayed romantic comedy from director Peter Chelsom stars Warren Beatty as a wealthy New York architect, Porter Stoddard. The revelation that his best friend Griffin (Garry Shandling) is cheating on his wife Mona (Goldie Hawn) leads to a mid-life crisis of sorts for Porter, jeopardizing his marriage to Ellie (Diane Keaton). When Mona leaves Griffin for her family's antebellum home in Mississippi, Porter accompanies her to lend his professional assistance in designing some home improvements and ends up entangled in a romantic assignation with his best friend's estranged wife. He then embarks on a series of other illicit, comical affairs. Among Porter's conquests are a cellist, Alex (Nastassja Kinski), the beautiful Eugenie (Andie MacDowell), and a Halloween reveler named Auburn (Jenna Elfman). He also runs afoul of Eugenie's overprotective father (Charlton Heston), who's armed with a shotgun and disturbingly unable to view his daughter as an adult. Town & Country (2001) is based on a script co-written by Buck Henry.

Holland Taylor
as Mistress of Ceremonies

Masayasu Nakanishi
as Japanese Guset No. 1

Akira Takayami
as Japanese Guest No. 2

Lisa Ekdahl
as Herself -- Singer

Angelo Tiffe
as Man at Table

Tom Billett
as Guard No. 1

Michael Bailey Smith
as Guard No. 2

Bonnie Ellen Miller
as Lady on Stairs
View All

Critical Consensus: "Because" Is Less Than So-So; "Messengers" Not Screened — Guess The Tomatometer!
The Weekly Ketchup: "Borat" Great Success, A New Sarah Connor, "Transformers" Travails, And More!
View All