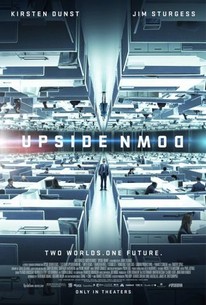 In spite of its wonderfully unusual premise and talented cast, Upside Down fails to offer much in the way of compelling drama to anchor its admittedly dazzling visuals.

Ever since Adam (Jim Sturgess) and Eden (Kirsten Dunst) fell in love as teens, their bond has faced astronomical odds. The pair are separated not just by social class and a political system bent on keeping them apart, but also by a freak planetary condition: they live on twinned worlds with gravities that pull in opposite directions-he on the poverty-stricken planet below, she on the wealthy, exploitative world above. Their budding but illicit romance screeches to a tragic halt when interplanetary-border patrol agents catch them and Eden suffers an apparently fatal fall. But when, ten years later, Adam learns she is alive and working at a vast corporation whose towering headquarters connects their planets, he sets out on a dangerous quest to infiltrate the company and the upper world to reconnect with her. UPSIDE DOWN is a visually stunning romantic adventure that poses the question: what if love was stronger than gravity?(c) Millenium

News & Interviews for Upside Down

Critics Consensus: The Incredible Burt Wonderstone is Short on Razzle Dazzle
Video Interviews with Jim Sturgess & Kirsten Dunst of Upside Down
View All

Critic Reviews for Upside Down

Audience Reviews for Upside Down