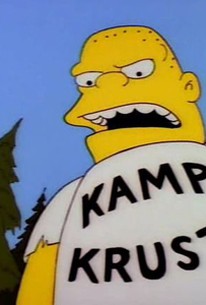 In the hopes that they can persuade their son, Bart Simpson (voice of Nancy Cartwright), to start taking his studies seriously, Homer (voice of Dan Castellaneta) and Marge (voice of Julie Kavner) promise their boy that if he manages a C average on his final report card of the year, he'll get to go to Kamp Krusty, a summer camp owned and operated by chain-smoking and ethically flexible children's entertainer Krusty the Clown (voice of Dan Castellaneta). While his sister Lisa (voice of Yeardley Smith) brings home all A's as usual, Bart doesn't quite make his goal; despite this, both Marge and Homer decide they could use a break from their troublesome son and send both Bart and Lisa to Kamp Krusty after all. However, life at Kamp Krusty turns out to be more like a punishment than a reward; the camp is a dangerous rattletrap, the food is awful, most of the counselors are sullen teenage bullies, and to add insult to injury, Krusty sends an impersonator rather than visiting the camp himself. For Bart, the presence of the fake Krusty is the last straw, and soon he's leading his fellow campers in an overthrow of Kamp Krusty. "Kamp Krusty" was first aired on September 24, 1992.