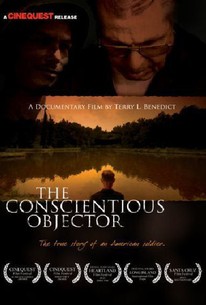 Ridiculed on the battlefield for rigidly adhering to his religious beliefs while positioned in the 77th Infantry Division during World War II, a most unlikely candidate for the Medal of Honor finally receives his due as filmmaker Terry L. Benedict profiles the soldier who became a hero in the face of intolerance. Desmond T. Doss is a devout member of the Seventh Adventist Church. Unlike a large number of soldiers who choose to put their personal beliefs aside at a time of war, Doss chose to remain true to his religious beliefs when summoned to serve his country and refused to take up arms against his enemies. Instead, Doss chose to save lives instead of taking them by becoming a medic. The decision didn't go down easily with his fellow soldiers, who made no attempts to mask their resentment of the man who rigidly honored the Sabbath by spending Saturdays in prayer. But in his isolation Doss found strength, ultimately saving countless lives on the battlefield (including the lives of soldiers who had previously ridiculed and scorned him). Deep behind enemy lines, the best friend to have is sometimes the man without a weapon.

Critic Reviews for The Conscientious Objector

Audience Reviews for The Conscientious Objector