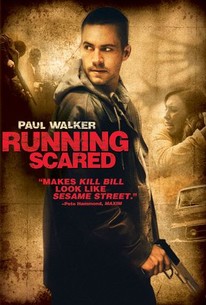 This film runs with frenetic energy punctuated by gratuitous violence but sorely lacks in plot, character development and stylistic flair.

A minor crook finds himself in major peril when a "hot" weapon goes missing in this violent crime thriller. Joey Gazelle (Paul Walker) is a low-level "mechanic" in the Mafia who hopes to rise through the ranks by doing whatever is needed. One night, a drug deal goes very wrong when police show up and try to close down the operation; shots break out and a battle ensues, with a pair of of cops meeting a particularly violent fate at bad end of a gun barrel. Joey is given the gun that killed the policemen and is told to make it disappear so it can't be used as evidence; however, before he can do that, the weapon is stolen by Oleg (Cameron Bright), a friend of Joey's young son, who takes the pistol and uses it to shoot his abusive stepfather. Now that the gun is implicated in high profile crimes, it's vitally important that Joey find it as soon as possible, but his search for the firearm is complicated by the fact that Oleg's stepdad is affiliated with a rival gang of Russian mobsters, and that Rydell (Chazz Palminteri), a seriously corrupt police detective, is hot on Joey's trail. Joey's search for the gun takes him through the grim criminal netherworld of the city, where he must face off against nearly every sort of crook, con artist, and deviate that has ever walked the earth. Running Scared is from writer-director Wayne Kramer, who made a name for himself with the well-reviewed independent feature The Cooler. ~ Mark Deming, Rovi