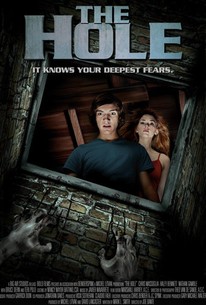 A welcome throwback to the suburban teen thrillers of the 1980s, The Hole is a scary, enjoyable return to form for director Joe Dante.

From legendary director Joe Dante comes a 3D thriller that explores the fears and secrets buried deep within the human mind. Life couldn't possibly get worse, or so thought 14 year old Dane and his 10 year old brother Lucas, when their single mother Susan uproots them from New York City to the sleepy little town of Bensonville. For Dane the only exciting thing about their new town is the beautiful girl next door, Julie. With Susan spending more and more time at work, Dane and Lucas are left unattended to explore the depths of their eerie new residence. But then everything changes when they find a sinister black hole under a locked trap door in the basement. Hoping for some answers about the house's past, Dane and Lucas bring Julie in on their new discovery. When the hole is exposed, evil is unleashed. With strange shadows lurking around every corner and past nightmares coming to life, the trio will have to come face to face with their darkest fears to put an end to The Hole. -- (C) Official Site

News & Interviews for The Hole

Critic Reviews for The Hole

Audience Reviews for The Hole