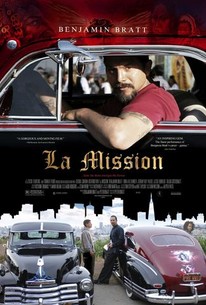 A reformed ex-convict and lowrider car aficionado kicks his beloved son out of the house after discovering that the boy has been living a secret life in Sundance Film Festival veteran Peter Bratt's heartfelt family drama. Che (Benjamin Bratt) is out of prison and on the straight and narrow. Still, every day is a struggle as he battles alcoholism and drives a bus in order to support his family. When the workday is done, Che and his friends, the "Mission Boyz," pass the time by restoring junked cars to mint condition. Feared by his peers yet deeply respected as the toughest Chicano on the block, Che is the kind of guy whose entire existence is defined by his macho reputation. There's no one in the world that Che loves more than his adolescent son, Jesse (Jeremy Ray Valdez), but both father and son are about to discover that love isn't exactly unconditional. Upon discovering that Jesse has been living a secret life, Che flies into a violent rage, assaulting the boy and kicking him out onto the street. Meanwhile, Che's attractive and headstrong neighbor Lena (Erika Alexander) challenges the ultra-macho gearhead to step back for a minute and take stock of the life he thought he had. ~ Jason Buchanan, Rovi

René A. Quiñonez
as Esteban

Max Rosenak
as Jordan
View All