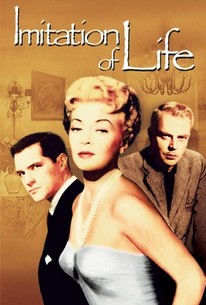 Douglas Sirk enriches this lush remake of Imitation of Life with racial commentary and a sharp edge, yielding a challenging melodrama with the power to devastate.

This glamorized remake of the 1934 film Imitation of Life bears only a passing resemblance to its source, the best-selling novel by Fannie Hurst. Originally, the heroine was a widowed mother who kept the wolf from the door by setting up a successful pancake business with her black housemaid. In the remake, Lana Turner stars as a would-be actress who is raising her daughter on her own. She chances to meet another single mother at the beach: African-American Juanita Moore. Moore goes to work as Turner's housekeeper, bringing her light-skinned daughter along. As Turner's stage career goes into high gear, Moore is saddled with the responsibility of raising both Turner's daughter and her own. Exposed to the advantages of the white world, Moore's grown-up daughter (Susan Kohner) passes for white, causing her mother a great deal of heartache. Meanwhile, Turner's grown daughter (Sandra Dee), neglected by her mother, seeks comfort in the arms of handsome photographer John Gavin. When Moore dies, her daughter realizes how selfish she's been; simultaneously, Turner awakens to the fact that she hasn't been much of a mother for her own daughter, whose romance has gone down the tubes. ~ Hal Erickson, Rovi

Mahalia Jackson
as Herself

Than Wyenn
as Romano

Critic Reviews for Imitation of Life

Audience Reviews for Imitation of Life