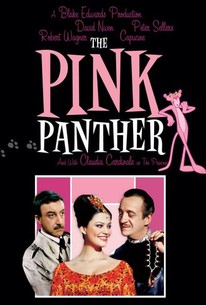 Peter Sellers is at his virtuosically bumbling best in The Pink Panther, a sophisticated caper blessed with an unforgettably slinky score by Henry Mancini.

In the first in a series of detective comedies from director Blake Edwards starring Peter Sellers as bumbling French Inspector Jacques Clouseau, the mishap-prone snoop is actually a supporting player. David Niven stars as Sir Charles Litton, a suave jewel thief known as "The Phantom." Vacationing in a deluxe Alpine resort, Litton's real purpose is to purloin the Pink Panther, a gem of enormous worth owned by a princess (Claudia Cardinale). On his trail for years, Inspector Clouseau keeps losing his quarry, perhaps because his wife Simone (Capucine) is Litton's lover and alerts him every time her husband draws near. Also after the Panther is Litton's American nephew, George (Robert Wagner). At a posh costume ball at the princess' villa, the bauble is stolen and Clouseau, still trying to determine the bandit's identity, is framed for the crime himself. The Pink Panther made Sellers and his Clouseau act so popular that the character moved to center stage in a series of farcical sequels.

Michael Trubshawe
as The Novelist

Martin Miller
as Photographer
View All

Critic Reviews for The Pink Panther

Audience Reviews for The Pink Panther