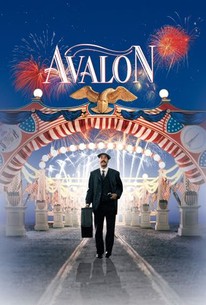 The third of director Barry Levinson's autobiographical "Baltimore Trilogy" (the first two entries were Diner and Tin Men), Avalon covers nearly forty years in the lives of an immigrant Jewish family. Sam Krichinsky (Armin Mueller-Stahl) emigrates to Baltimore in 1914, where Sam's brothers Gabriel (Lou Jacobi), Hymie (Leo L. Fuchs), and Nathan (Israel Rubinek) are awaiting his arrival. By and by, Sam meets his future wife, Eva (Joan Plowright). With the introduction of the Krichinsky's grown son Jules (Aidan Quinn), the film ventures into culture-clash country. Unwilling to become a manual laborer like his dad, Jules opts for the life of a door-to-door salesman. Eventually, he teams with his cousin Izzy (Kevin Pollak) to open the first TV store in Baltimore. Thereafter, the disintegration of the Krichinsky family is paralleled by the rise of TV's omnipresence in the American home. Avalon's elegiac and melancholy effect is underlined by Randy Newman's soulful musical score.

Herb Levison
as Rabbi at Funeral

Miles A. Perman
as Gas Attendant

Herb Levinson
as Rabbi at Funeral

Alvin Myerovich
as The Father

Moishe Rosenfeld
as William as a Young Man

Michael Krauss
as Sam as a Young Man

Michael David Edelstein
as Gabriel as a Young Man

Bernard Hiller
as Hymie as a Young Man

Brian Shait
as Nathan as a Young Man

Dawne Hindle
as Eva as a Young Woman

Christine Mosere
as Nellie as a Young Woman

Anna Bergman
as Alice as a Young Woman

Mary Lechter
as Faye as a Young Woman

Barbara Morris
as Mollie as a Young Woman

Tom Wood
as Michael as an Adult

Ava Eileen Quinn
as David as a Baby