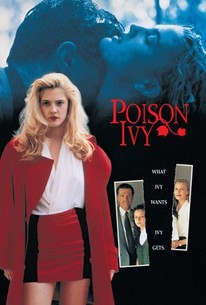 An unpleasant thriller that lacks the self-awareness to dilute its sordid undertones, Poison Ivy is liable to give audiences a rash.

The always challenging transition from adorable child performer to sexy adult star was achieved flamboyantly by actress Drew Barrymore with this erotic drama that unfolds like a paranoia-drenched Lolita (1962). Sylvie Cooper (Sara Gilbert) is a misanthropic student at a private high school for children of the privileged. While calling in a phony bomb threat to the TV station where her father, Darryl (Tom Skerritt) is a producer, Sylvia attracts the attention of Ivy (Drew Barrymore). Ivy is an orphan from a poor family, attending the school on a scholarship. She and Sylvia quickly become best friends, and Ivy eventually moves out of her aunt's home and into the Cooper household. Ivy covets the Coopers' lavish lifestyle and luxuries, so she begins plotting to kill Sylvie's ailing mother Georgie (Cheryl Ladd), then seduce the alcoholic Darryl and frame Sylvie for the crime, thus taking over the Cooper house. Director Katt Shea Ruben and her co-writer husband Andy Ruben were veterans of the Roger Corman school of filmmaking. The success of Poison Ivy (1992) on video and cable television inspired a pair of sequels, Poison Ivy 2: Lily (1996) and Poison Ivy: The New Seduction (1997).

J.B. Quon
as Another Kid

Michael Goldner
as Man in Car

Tony Ervolina
as Man on Screen

Julie Jay
as Nurse Behind Desk

Warren Burton
as Max
View All