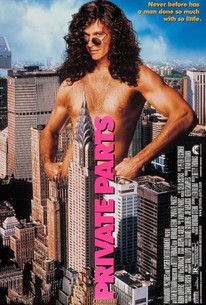 A surprisingly endearing biopic about the controversial shock-jock Howard Stern that is equally funny and raunchy.

The life and career of shock-jock superstar Howard Stern (himself) is recounted from his humble beginnings to his view from the top. Possessing a desire to be an on-air personality since childhood, Stern meanders through the radio world, always with his supportive wife, Alison (Mary McCormack), by his side. Landing a gig in Washington, D.C., Stern meets Robin Quivers (herself), who will become his long-time partner in crime. When the two move to New York, they face the wrath of NBC executives.

Howard Stern
as Himself

Robin Quivers
as Herself

Fred Norris
as Himself

Gary Dell'Abate
as Himself

Jackie Martling
as Himself

Richard B. Shull
as Symphony Sid

Susan May Pratt
as Stewardess

John Stamos
as Himself

Ted Nugent
as Himself

Ozzy Osbourne
as Himself

John Popper
as Himself

Tiny Tim
as Himself

John Melendez
as Himself

George 'Crackhead Bob' Harvey
as Himself

Nicole Bass
as Herself

Carrie Flaska
as Wife in Car

David Letterman
as Himself

Mia Farrow
as Herself

Chris Barron
as Himself

Flavor Flav
as Himself

M.C. Hammer
as Himself

Dee Snider
as Himself

Renee Suran
as Herself
View All