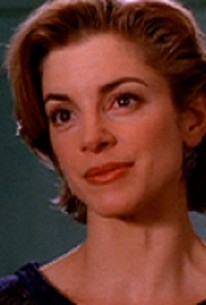 Produced for the USA cable network, Holiday Affair is a remake of the classic 1949 theatrical film of the same name, which in turn was inspired by John D. Weaver's short story "Christmas Gift." Cynthia Gibb and David James Elliott step into the roles of widowed mother Jodie Ennis and department store salesman Steve Mason, the characters originally played by Janet Leigh and Robert Mitchum. "Meeting cute" while Jodie's son Timmy (Curtis Blanck) enthuses over a model train set, Jodie and the raffish but likeable Steve immediately hit it off, but she is already engaged to conservative lawyer Paul Davis (Tom Irwin, taking over from the original's Wendell Corey). The days between Christmas and New Year's Eve, Jodie finds herself in the unenviable position of choosing between two men whom she adores equally--a job not made easier by the well-meaning interference of son Timmy. The remake faithfully recreates most of the familiar setpieces from the 1949 version, including the Christmas-dinner sequence with Timmy's grandparents and a climactic confrontation in a courtroom over a case of mistaken identity. The presence of Al Waxman in the cast is a sure tipoff that, despite its New York City setting, the film was actually made in Canada. Holiday Affair first aired December 15, 1996.

Shadia Simmons
as Girl on Rollerblades

There are no critic reviews yet for Holiday Affair. Keep checking Rotten Tomatoes for updates!

There are no featured audience reviews for Holiday Affair at this time.