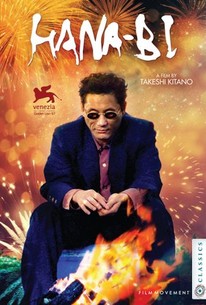 Actor and auteur Takeshi Kitano (who in Japan also uses the stage name "Beat" Takeshi, primarily for his work as a television comedian) wrote, directed, edited, and starred in this unusual crime drama. Nishi (Takeshi Kitano) is a policeman whose emotions seem to run only on two extreme paths -- either quiet contentment or brutal rage. Nishi's life is falling apart around him; his daughter was murdered, his wife, Miyuki (Kayoko Kishimoto), is dying of leukemia, his partner, Horibe (Ren Osugi), was ambushed by thugs after Nishi left him to visit his wife in the hospital and will now spend the rest of his life in a wheelchair, and another cop was killed coming to Horibe's rescue. Nishi desperately wants to quit his job so he can spend more time with his dying wife, so he borrows a large sum of money from the yakuza (the Japanese mafia) and takes up a career as a painter while he cares for Miyuki. Not wanting to stay in debt to the gangsters, Nishi engineers a daring bank robbery (using his police uniform and an old auto disguised to look like a squad car) and uses the loot to pay off the yakuza and take his wife on a final vacation. However, the loan sharks are not eager to have Nishi off the hook, and they begin complaining that he still owes them interest on their loan. ~ Mark Deming, Rovi