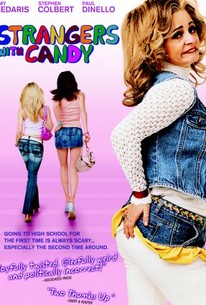 Occasionally funny, but little more than a jumbled, overextended episode of the TV show. Still, Candy devotees won't be disappointed.

The cult-favorite television series which offered a fun-house version of '70s "after-school specials" returns in this big-screen prequel to the show Strangers With Candy. Middle-aged ex-prostitute, former drug addict and all-around lowlife Jerri Blank (Amy Sedaris) emerges from prison at the age of 46 ready to start her life over again. Jerri arrives at her parents' home to discover that her father Guy (Dan Hedaya) divorced Jerri's mom and remarried before slipping into a coma. Jerri's stepmom Sara (Deborah Rush) decides to let her stay with the family in the hope her presence might bring Guy around, though she doesn't seem very fond of her new "daughter." Jerri decides to complete the education she abandoned years ago by enrolling at Flatpoint High School, where Principal Blackman (Greg Hollimon) has bigger fish to fry than a middle-aged sex offender as a student. It seems Flatpoint's science scores have been dreadful, and only a first-place entry in the county science fair will maintain the school's accreditation. Science fair guru Roger Beekman (Matthew Broderick) is brought in with hopes of creating a winning project, but science teacher Mr. Noblet (Stephen Colbert) objects to using outside talent and starts a separate team of his own, bringing in Jerri to give her something to do. As it happens, Noblet's team comes up with a potential prize-winner with their Soup Can Superconductor, while Beekman foolishly accepts the help of art teacher Mr. Jellineck (Paul Dinello) and ends up with a dance routine instead of a science presentation. Determined to win out over Noblet's team, Beekman tries to get his hand on the plans for Noblet's project by convincing handsome Brason (Chris Pratt) to charm them away from weak-willed Jerri. Strangers With Candy also features cameo appearances from Philip Seymour Hoffman, Allison Janney, Ian Holm, and Kristen Johnston. ~ Mark Deming, Rovi

News & Interviews for Strangers with Candy

Critic Reviews for Strangers with Candy

Audience Reviews for Strangers with Candy