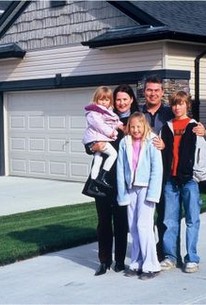 Radiant City, which represents the first collaboration between documentarist Gary Burns and journalist Jim Brown, takes as its springboard thesis the idea that suburban life is quickly becoming the norm for families across North America. It thus carries viewers inside of the "suburban mystique" via a protracted dissection of a clan that resides in a planned community, the Moss family. The film specifically examines how the suburban landscape, with its prefab houses, playgrounds, schools, strip malls, and community activities, continues to shape and define the lives and perceptions of these individuals -- from the father's involvement with a local theatrical troupe to the children's feelings of ennui and sense of removal from the neighbors in their subdivision. Burns offsets the picture's stark themes and undertones, however, with a sharp, wicked, and occasionally satirical sense of humor that never fails to catch the absurdities or ironies of this landscape. Musician Joey Santiago, from the band the Pixies, complements the images with a gritty rock soundtrack that draws out the sense of familial dislocation and desperation. The picture also traces the rise of suburbia historically, and features input by such suburban commentators as Mark Kingwell, from the University of Toronto, and writer James Howard Kunstler, who criticize the initial postwar model for suburban communities and suggest that it may not provide the optimal environment for living and raising a family.

Stirling Karlsen
as Actor in Play

Chantal Perron
as Actor in Play

Keith White
as Actor in Play

Natasha Girgis
as Actor in Play

Mina Simi
as Woman at Play

Doris Latrielle
as Woman at Play
View All

Critical Consensus: "Knocked Up" Is A Knockout; "Mr. Brooks," "Gracie" Less So
View All