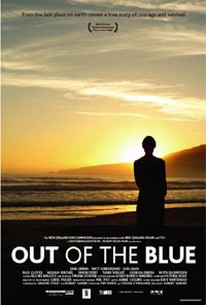 Out of the Blue (Aramoana)

A dramatization of real-life terror that's rendered all the more powerful through its sensitivity, Out of the Blue succeeds as a gripping drama as well as a moving commemoration.

Out of the Blue (Aramoana) Ratings & Reviews Explanation

Out of the Blue (Aramoana) Photos

Out of the Blue, New Zealand writer-director Robert Sarkies' long-awaited follow-up to his 1999 feature debut, Scarfies, recreates the events that led up to and surrounded David Gray's November 13, 1990 mass murder of 13 locals in the town of Aramoana, New Zealand. Sarkies, however, approaches the material not as exploitation nor as an action picture, but -- like Terrence Malick in his 1973 true crime picture Badlands -- as an understated and detached drama. Sarkies uses a contemplative and reflective approach and a small-town pace and resists gratuitousness, intersecting several tales of casualties and survivors and downplaying the brutal violence. One story involves the contentious relationship between fiftysomething Jim (Timothy Bartlett) and his mother (Lois Lawn); another has a mom, Julia Anne (Tandi Wright) informing her daughter Rewa (Jacinta Wawatai) and her beau's children that they plan to share a house; and in a third, eccentric gun nut David Gray (Matthew Sunderland) cracks and guns down Julia's boyfriend, Gerry (Simon Ferry), in cold blood. These only represent the first three threads in a complex narrative tapestry; the story ultimately gives way to tense hours as the locals, realizing that a predator is on the loose and will kill anyone he can find, barricade their homes and cower in fear. Cinematographer Greig Fraser gives the picture a chilly, wintry aesthetic, rich with whites and blues. The film co-stars Karl Urban; Graeme Tetley co-authored the script with Sarkies.

Critic Reviews for Out of the Blue (Aramoana)

Audience Reviews for Out of the Blue (Aramoana)

Out of the Blue (Aramoana) Quotes