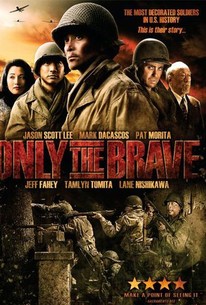 Only the Brave Ratings & Reviews Explanation

Only the Brave Photos

Actor, playwright, and stage director Lane Nishikawa takes his first turn behind the camera with this war drama detailing the efforts of the Japanese-American 100th/442nd Regimental Combat Team, an all-volunteer brigade, in ensuring a U.S. victory during World War II. Shortly after Japan bombed Pearl Harbor, 5,000 Japanese-American soldiers were discharged from the military, and 120,000 men women and children were relocated to heavily guarded internment camps in the U.S. After petitioning the U.S. government for the right to serve, some 1,400 Hawaiian Territorial Guardsmen from Japanese families were allowed to serve in what would be known as the 100th Infantry Battalion. Later dubbed the "Purple Heart Battalion" for their bravery on the battlefield in North Africa and Italy, the soldiers went on to free three towns in Southern France before attempting to rescue the Texas' 36th Division from a perilous situation in France's Vosges Mountains. There on a towering plateau, 275 American soldiers were facing a hopeless situation. Surrounded on all sides by thousands of German soldiers, they had little hope for escape. A substantially larger Army unit had already failed at a rescue attempt, but the brave men of the 100th/442nd were determined to succeed. And despite heavy losses, they ultimately rescued 211 of the 275 stranded Texans. This is the story of the soldiers who didn't allow the racism of the time to taint their patriotism, and the experiences they endured on the road to becoming some of the most celebrated heroes of World War II.

Critic Reviews for Only the Brave

Audience Reviews for Only the Brave

There are no featured audience reviews for Only the Brave at this time.

Only the Brave Quotes