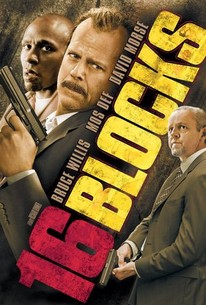 Despite strong performances from Bruce Willis and Mos Def, 16 Blocks is a shopworn entry in the buddy-action genre.

A hard-drinking, hard-living cop assigned the task of transporting a small-time criminal to the nearby courthouse finds that a simple, 16-block drive can be the longest ride of his life in director Richard Donner's urban action thriller. Hung-over, has-been cop Jack Mosley (Bruce Willis) has seen better days, and all that the force expects out of him these days is to stay out of trouble while he's on the clock. Eddie Bunker (Mos Def) is set to testify before a grand jury at 10:00 a.m., and it's up to Mosely to make sure that Bunker makes it to the courthouse in one piece -- a job that Mosely estimates will take a maximum of 15 minutes. A black van has been trailing the pair unnoticed, though, and after stopping off at a nearby liquor store to pick up some breakfast, Mosely emerges from the store just in time to save Eddie from the lethal bullet of a determined assassin. When backup arrives in the form of Detective Frank Nugent (David Morse), Mosely quickly realizes that the detective on Nugent's team is the same cop that Bunker is set to testify against. Now faced with the tough task of dodging bullets and eluding a massive onslaught of corrupt cops, Mosely must keep Bunker alive long enough to get him before the judge and ensure that justice is served. ~ Jason Buchanan, Rovi

Bernie Henry
as Man With Caddy

Victoria Mitchell
as Woman In Apartment

Heather Dawn
as The Juror

Daryl Dismond
as Man In Suit