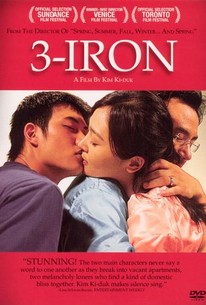 A battered woman finds her soul mate in a most unusual manner in this drama from Korean filmmaker Kim Ki-Duk. Tae-suk (Jae Hee Song) is a young drifter who appears to be homeless by inclination as much as necessity; he squats in the homes of strangers while they're away, carefully seeing to it that no damage is done to the property and sometimes performing small household chores as a display of gratitude. One day, Tae-suk sneaks into a house where a number of photos of a beautiful model adorn the walls. After eating, washing up, and doing some minor repairs, Tae-suk discovers he's being watched by the woman of the house, Sun-hwa (Lee Seung-yeon), and he soon recognizes her as the model in the photos. However, Tae-suk sees that Sun-hwa has been badly bruised, and suspects she's been the victim of domestic violence. When Tae-suk returns to the home later that evening, his suspicions are confirmed as he sees Sun-hwa being slapped around by her husband, Min-kyo (Gweon Hyeok-ho). Tae-suk impulsively bursts into the house, grabs a golf club, and attacks Min-kyo with it; moments later, Tae-suk and Sun-hwa ride away together on his scooter, and she silently joins him in his existence as a squatter, which slowly blossoms into a love affair. Bin-Jip (aka 3-Iron) received its North American premiere at the 2004 Toronto Film Festival. ~ Mark Deming, Rovi

Kim Han
as Man in Studio

Park Se-jin
as Woman in Studio

Lee Jeong-sub
as Man Who Came Back From Family Trip

Lee Ui-soo
as Woman Who Came Back From Family Trip

Ryoo Jong-hwa
as Boy Who Came Back From Family Trip

Hoon Jang
as Guy Who Stares