A Summer In Genoa 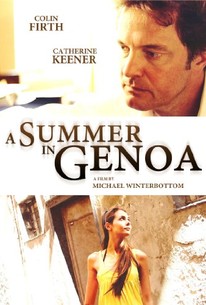 A Summer In Genoa

Michael Winterbottom's tale of grief and mourning, though frustrating in places, is intelligent filmmaking with superb central performances.

A Summer In Genoa Photos

In the wake of a family tragedy, an English ex-patriot living in the United States decides to relocate himself and his daughters to Italy, only to discover that grief has followed them overseas when the youngest girl proves unable to move past her acute emotional pain. An Englishman at heart, Joe (Colin Firth) now lives a happy life with his wife and daughters in the United States. Their happy existence is turned upside down in an instant, however, when his wife is driving their daughters home one day and becomes momentarily distracted from the road. Later, as Joe and his daughters attempt to contend with the thick fog of grief hanging over their household, the loving father surmises that a change of scenery may be in order; accepting a teaching job in Italy in hopes that it will help them contend with their bereavement. For teenage daughter Kelly (Willa Holland), at least, the move works miracles: though Kelly was sullen and withdrawn back home, she seems awakened by the endless possibilities that the future may hold in Europe - even entering into a clandestine romance with a handsome Italian boy. Kelly's younger sister Mary (Perla Haney-Jardine), unfortunately, is another case entirely. Despite her father's most valiant efforts to assuage her grief, Mary just doesn't seem capable of shaking the loss. Meanwhile, as Joe rekindles an old friendship with a university colleague (Catherine Keener), his family soaks in the marvelous medley of medieval, Renaissance, and contemporary influences of the scenic, northern Italian city.

Gary Wilmes
as Dan
View All

Critic Reviews for A Summer In Genoa

Audience Reviews for A Summer In Genoa

A Summer In Genoa Quotes