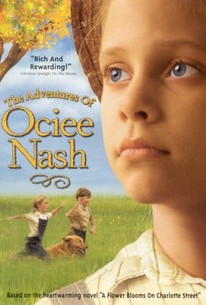 The Adventures of Ociee Nash

Nine-year-old Ociee Nash (Skyler Day) is living a carefree life in rural Mississippi, spending her days playing with her brother, Ben (Bill Butler), and her dog, Woofer. After she befriends a mysterious Gypsy, however, her single father (Ociee's mother has died) decides this tomboy existence is not the one she should be leading, and decides to send Ociee to live with her straight-laced Aunt Mamie (Mare Winningham) in Ashville, NC, in hopes that she can teach Ociee to become a proper young lady. While Ociee is not pleased with the situation, she soon finds interesting people and adventures in her new home. She befriends well-bred Elizabeth Murphy (Jasmine Sky) and meets colorful characters such as Nellie Bly (Donna Wright), Orville and Wilbur Wright (Sean Daniels and Ty Pennington), and even President McKinley (Daniel Burnley). She also manages to get herself into plenty of scrapes and misadventures, much to the displeasure of Aunt Mamie. Over time, however, Ociee and Aunt Mamie come to understand and appreciate each others' differences, allowing Ociee's true sprit and character to shine through. The Adventures of Ociee Nash is based on the novel A Flower Blooms on Charlotte Street by Milam McGraw Propst and adapted for the screen by sisters Amy and Kristen McGary (who also directs).

Lucas Till
as Harry Vanderbilt

Mitch Braswell
as Neighbor at Fire

Critic Reviews for The Adventures of Ociee Nash

Audience Reviews for The Adventures of Ociee Nash

There are no featured audience reviews for The Adventures of Ociee Nash at this time.

The Adventures of Ociee Nash Quotes