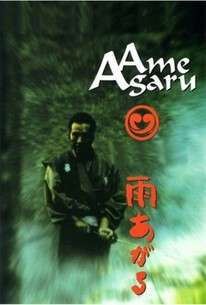 After the Rain Ratings & Reviews Explanation

After the Rain Photos

Shortly before his death in 1998, Akira Kurosawa completed a screenplay entitled Ame Agaru, based on a short story by Shugoro Yamamoto. Kurosawa passed on before he could bring this story to the screen, but one of his assistants, Takashi Koizumi, has directed a film adapted from the script, following as closely as possible the style of the master. Ihei Misawa (Akira Terao) is a ronin, a samurai without a master, whose skills with a sword make him a valuable employee but whose brutal honesty and lack of social graces prevent him from staying with one master for too long. One night, Ihei impulsively offers to buy food and drink for the guests at a hotel; he doesn't have the money to pay, and to raise cash he concocts a scheme to take on anyone brave enough to fight him for a prize. Ihei's fighting skills impress Lord Shigeaki (Shiro Mifune), who offers him a position as fencing master in his court. Ihei gratefully accepts, but when Shigeaki challenges him to a fight, Ihei beats the Lord decisively. Ihea is certain that he's managed to throw another opportunity away when a band of mercenaries attacks him, and his skills as a swordsman are put to the ultimate test. This traditionally styled samurai story harkens back to Kurosawa's best-known works, and features Shiro Mifune, the son of Toshiro Mifune, one of Kurosawa's favorite actors, in a key role.

Critic Reviews for After the Rain

There are no critic reviews yet for After the Rain. Keep checking Rotten Tomatoes for updates!

Audience Reviews for After the Rain

After the Rain Quotes