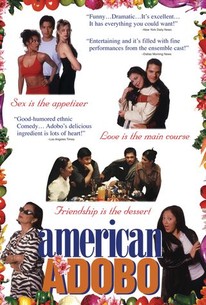 The characters and situations seem borrowed from overwrought sitcoms.

Five Filipino-American friends living in New York City deal with love, sex, friendship, careers, and cultural identity in this romantic comedy-drama directed by veteran Philippine actress Laurice Guillen. Tere Sanchez (Cherry Pie Picache) is an accountant who is in her early forties, single, and not especially happy about it. Tere is an excellent cook, and often throws dinner parties for her friends, and the arrival of her old friend Lorna (Sol Oca) from Manila is all the reason she needs to invite her friends over for a feast. Mike (Christopher De Leon) is a former political journalist who is now enjoying the fruits of a lucrative career as a newspaper editor, but he wonders if he left his principles behind along the way; he's also feeling unfulfilled in his marriage to Gigi (Susan Valdez-LeGoff). Gerry (Ricky Davao) is a advertising copywriter who is afraid to tell his friends and family that he's gay, though circumstances may well drive him out of the closet. Raul (Paolo Montalban) is a good-looking ladies' man who prefers to date Caucasians, and lacks a certain amount of emotional maturity. And Marissa (Dina Bonnevie) is on the surface a well-to-do social butterfly; however, deep inside she's woefully insecure, and is afraid to confront her boyfriend Sam (Randy Becker) about his constant infidelity. Meanwhile, Lorna confesses that while she's married to a wealthy man in Manila, she's terribly unhappy, and is considering staying in America as an illegal alien. American Adobo was the first American-Philippine co-production to open in three major American cities at once (New York, Los Angeles, and San Francisco); incidentally, adobo is a spicy chicken or pork dish popular in the Philippines.

There are no featured audience reviews for American Adobo at this time.