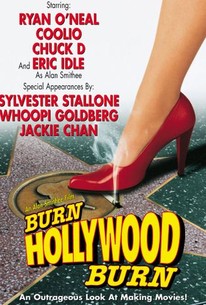 A witless Hollywood satire whose hammy, obvious jokes are neither funny nor insightful of the movie business.

The existence of Alan Smithee is one of Hollywood's biggest non secrets. The director of over 30 feature films, he was born, or rather created, as a pseudonym in 1967 for the film Death of a Gunfighter (which was not released until 1969). He owes his creation to Hollywood directors (and sometimes actors and others involved in the creative process) who feel that a project has been wrongfully over-edited, or is just too embarrassingly bad to merit their names upon it. The Director's Guild carefully regulates the usage of the famous pseudonym. Some believe the name is an anagram of The Alias Men, while others contend that the name was chosen because of its uniqueness -- no one in the world could possibly be named Alan Smithee, right? Wrong. The premise of this filmed attempt, by screenwriter Joe Eszterhas, to rake Hollywood over the coals is that there really is a Smithee (Eric Idle) and he has just finished his latest epic actioner Trio, which stars Sylvester Stallone, Whoopi Goldberg and Jackie Chan (these three are the first of several star cameos occurring throughout). Unhappy that domineering, egomaniacal producer James Edmunds (Ryan O'Neal) -- who only hired Smithee because he thinks the director's an easily-manipulated sap -- has ruined Trio by over-editing it, Smithee goes to the Director's Guild to see about having his name removed from the credits. This proves problematic, for how can "Alan Smithee" be used if that is the director's real name. In desperation, the filmmaker kidnaps the negative of the $22-million movie and ultimately burns it. This act lands Smithee a spot in the Keith Moon Psychiatric Institute in England. It is from there that Smithee tells his version of the tale to investigators assigned to "autopsy" the film. His account is what comprises the bulk of the plot. One of the film's treats is to look for stars such as Billy Bob Thornton and Sandra Bernhard, and Hollywood honchos, notably Miramax big-wig Harvey Weinstein, in cameo roles. There are also numerous inside jokes for film buffs. Ironically, the film's real-life director Arthur Hiller had his name removed from An Alan Smithee Film because he didn't like the way in which Eszterhas recut the film. Eszterhas and Hiller swear that this was not a publicity stunt, but it does make one wonder.

Sylvester Stallone
as Himself

Jackie Chan
as Himself

Jim Piddock
as Attendant No. 1

Naomi Campbell
as Attendant No. 2

Robert Evans
as Himself

Robert Shapiro
as Himself

Linnell Shapiro
as Himself

Grant Shapiro
as Himself

Brent Shapiro
as Himself

Shane Black
as Himself

Jeremy Baka
as Himself

Mario Machado
as Himself

Lisa Canning
as Herself

Gary Franklin
as Himself

John Corcoran
as Himself

Joe Eszterhas
as Himself

Naomi Eszterhas
as Herself

Larry King
as Himself

Peter Bart
as Himself

Dominick Dunne
as Himself

Billy Bob Thornton
as Himself

Billy Barty
as Himself

Norman Jewison
as Himself

Victor Drai
as Himself

Stanley Ralph Ross
as Himself

Alan Smith
as Himself

Robin Dugger
as Clyde
View All