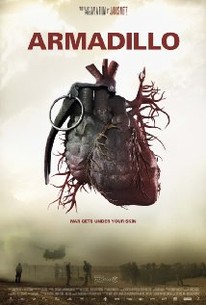 ARMADILLO is an astute exploration of the culture of war. Director Janus Metz follows Danish soldiers fighting the Taliban in the Helmand province of southern Afghanistan with sophisticated visual artistry rarely achieved under such raw conditions. Building his film around the characters within the platoon, Metz allows us to witness how war transforms the different personalities, and the group, approaching his subjects with an intimacy equal to that of fiction. The active military base "Armadillo" houses a mix of 170 Danish and British soldiers in the ISAF (International Security Assistance Force) who are responsible for providing security to the surrounding area and eliminating the Taliban insurgency. Metz follows his subjects through an entire tour of duty, creating an unforgettable portrait of the reality of military life on the front lines. Documenting both the boredom and horror of warfare, Metz shows us the soldiers playing video games and laughing at pornography, struggling to communicate with disillusioned civilians, and killing a group of Taliban soldiers found hiding in a trench. The film avoids judgments for or against the war, and instead shows the soldiers struggling to maintain their humanity in a world filled with violence.-- (c) New Yorker