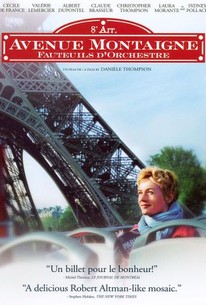 A cute and bubbly French comedy that carries no deeper lessons or agendas than to have a little fun for 90 minutes.

A fresh-faced orphan from the provinces labors away at the last old-fashioned café on Avenue Montaigne as the Paris theater elite prepare for the biggest night of the year in Jet Lag director Danièle Thompson's whirlwind comedy of intersecting lives. Jessica (Cécile De France) may have been orphaned at the tender age of four, but her doting grandmother (Suzanne Flon) did her best to bring the motherless girl up right. A one-time ladies' room attendant at The Ritz, Jessica's grandmother was a woman well known for her extraordinary taste. Upon arriving in Paris to work as a waitress at a modest café nestled between a renowned concert hall, a venerable theater, and a high-profile auction house, Jessica soon finds herself interacting with a curious cross section of the thriving entertainment industry. As rehearsals for the upcoming shows get under way and Jessica is assigned the task of delivering food to the hardworking actors and low-earning stagehands, she soon discovers that even the most famous of people are often forced to make difficult decisions in life. Jean-François Lefort (Albert Dupontel) is a classical pianist whose devoted wife has him booked at venues across Europe for the next six years. As the free-spirited musician struggles to eschew the formality of his upcoming concert appearance, self-made businessman Jacques Grumberg (Claude Brasseur) takes time out from his May-December romance and his stressful medical treatment in order to auction off a collection that he has been building his entire life and reach out to his estranged intellectual son, Frédéric (Christopher Thompson). Meanwhile, back on the theater front, popular television actress Catherine Versen (Valérie Lemercier) prepares to star in a farcical play, a famous American film director (Sydney Pollack) begins auditioning actors for an upcoming film about Jean-Paul Sartre and Simone de Beauvoir, and a cheerful concierge on the verge of retirement (Dani) enjoys her final stint rubbing elbows with the biggest and brightest stars in Paris.

Eve Ruggieri
as Herself

Simon de Pury
as Himself

Kaori Tsuji
as Journalist
View All