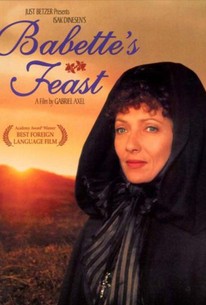 Charming and melancholy, Babette's Feast is a timeless Scandinavian treat that explores the complex relationships between people, beliefs, and what it means to be an artist.

The Danish/French Babette's Feast is based on a story by Isak Dinesen, also the source of the very different Out of Africa (1985). Stephane Audran plays Babette, a 19th century Parisian political refugee who seeks shelter in a rough Danish coastal town. Philippa (Bodil Kjer) and Martina (Birgitte Federspiel), the elderly daughters of the town's long-dead minister, take Babette in. As revealed in flashback, Philippa and Martina were once beautiful young women (played by Hanne Stensgaard and Vibeke Hastrup), who'd forsaken their chances at romance and fame, taking hollow refuge in religion. Babette holds a secret that may very well allow the older ladies to have a second chance at life. This is one of the great movies about food, but there are way too many surprises in Babette's Feast to allow us to reveal anything else at this point (except that Ingmar Bergman "regulars" Bibi Andersson and Jarl Kulle have significant cameo roles).. ~ Hal Erickson, Rovi

Lisbeth Movin
as The Widow

Preben Lerdorff Rye
as The Captain

Pouel Kern
as The Vicar

Ebba With
as Lorens' Aunt

Else Peterson
as Solveig

Else Petersen
as Solveig

Viggo Bentzon
as Fisherman in Rowboat