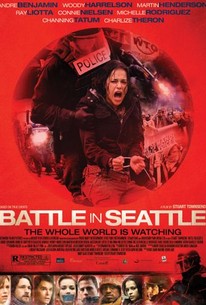 Well intentioned and passionate, this docu-drama about the 1999 WTO protests is heavier on politics than character development.

Actor-turned-filmmaker Stuart Townsend makes his screenwriting and directorial debut with this ensemble film set during the 1999 World Trade Organization meeting in Seattle and presenting the riots that swept through the streets during the five-day conference from the perspectives of police, protestors, and city officials. A typically laid-back Northwestern city, Seattle would erupt into violence when, for five days in 1999, tens of thousands of protestors flooded the streets to voice their disapproval of the high-profile World Trade Organization conference. Among that sea of protestors are Django (André Benjamin), Sam (Jennifer Carpenter), Jay (Martin Henderson), and Lou (Michelle Rodriguez) -- each convinced that the stakes go beyond politics and equally determined to make a difference by ensuring that their voice of dissent is heard by the masses. At first the demonstration is peaceful, but in an instant the streets explode and the WTO is paralyzed. As a full-scale riot commences and a state of emergency is declared, the residents of Seattle are caught in the crossfire between protestors and police. With beleaguered mayor Jim Tobin (Ray Liotta) scrambling to diffuse tensions and riot cop Dale Anderson (Woody Harrelson) racing to protect his pregnant wife, Ella (Charlize Theron), everyone involved is forced to make difficult decisions that are sure to change their lives forever. ~ Jason Buchanan, Rovi

Haskell Wexler
as Himself
View All

News & Interviews for Battle in Seattle

Critic Reviews for Battle in Seattle

Audience Reviews for Battle in Seattle