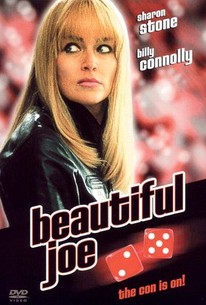 A dying man finds that horses, blondes, and the Mob may end his life faster than cancer in this dark comedy from the U.K. Joe (Billy Connolly) is a regular guy who runs a flower shop and has never had much in the way of good luck. Things seem to be grim for Joe when he's diagnosed with a brain tumor, but a bit of good fortune appears on the horizon when he wins a jackpot at the racetrack. However, Hush (Sharon Stone), an exotic dancer who has fallen deeply in debt to a gang of thugs, steals Joe's newly won fortune to pay them off. Joe gets his money back by explaining to the gangsters what happened, but only because they mistake him for a syndicate kingpin they've heard about but never met. When the gangsters discover that Joe is a florist and not a career criminal, they find the situation less than amusing. Beautiful Joe also stars Ian Holm, Gil Bellows, and Jurnee Smollett. While the film enjoyed a theatrical run in Europe, it debuted in America on the Cinemax premium cable network.

Ian Holm
as George the Geek

Ken Pogue
as Lou
View All

There are no featured audience reviews for Beautiful Joe at this time.