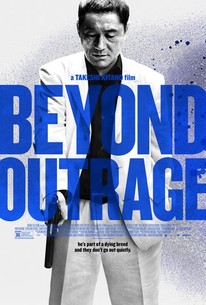 With BEYOND OUTRAGE, action cinema master Takeshi Kitano returns to the hard boiled characters, black comedy and unflinching violence of his crime masterpiece OUTRAGE. This time, a manipulative police crackdown on organized crime has ignited a tricky power struggle in the yakuza underworld. The Sanno crime family has grown into a massive organization dominated by young executives whose new approach to running the family is causing frustration and pent-up resentment with the old-guard members. This vulnerability in the Sanno hierarchy is exactly what anti-gang detective Kataoka has been looking for, as the police force prepares a full-scale crackdown. Kataoka wants start a war between Sanno and the neighboring Hanabishi crime family in the hopes that they destroy each other. His trump card is Otomo (Kitano) - the rumored-dead boss of a defunct family that was destroyed by the Sanno, who has just been released from prison. Otomo wants to retire from a life of crime, but finds himself drawn back in through Kataoka's manipulations as the Sanno and Hanabishi clans teeter on the brink of an all-out war. (c) Magnet

Ryo Kase
as Ishihara - Underboss of the Sanno

Toshiyuki Nishida
as Nishino - Underboss of the Hanabishi

Tomokazu Miura
as Kato - Chairman of the Sanno

Shigeru Koyama
as Fuse - Chairman of the Hanabishi

Hirofumi Arai
as Shima
View All

News & Interviews for Beyond Outrage

Critic Reviews for Beyond Outrage

Audience Reviews for Beyond Outrage