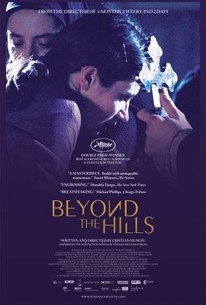 Although some viewers may mistake its deliberate pace for passionless filmmaking, Beyond the Hills offers an intelligent, powerfully acted examination of the tension between secular life and religious faith.

Beyond The Hills Ratings & Reviews Explanation

Beyond The Hills Photos

In an isolated Orthodox convent in Romania, Alina has just been reunited with Voichita after spending several years in Germany. The two young women have supported and loved each other since meeting as children in an orphanage. Alina wants Voichita to leave and return with her to Germany, but Voichita has found refuge in faith and a family in the nuns and their priest, and refuses. Alina cannot understand her friend's choice. In her attempt to win back Voichita's affection, she challenges the priest. She is taken to hospital and the people of the monastery start to suspect that she is possessed. When the doctors send her back, Alina is included in the monastic routine in the hope that she will find peace. But her condition worsens and they finally have to tie her to a wooden plank to prevent her from hurting herself. After ruling out all other options, the priest and nuns decide to read her prayers to deliver those possessed by the Evil One. They perform an exorcism, but the result is not what they had hoped, and Voichita begins to doubt the religious choice she has made. She decides to free Alina - but her decision comes too late. Inspired by the non-fiction novels of Tatiana Niculescu Bran.

Valeriu Andriuta
as The Priest

Adrian Ancuta
as Man in the Car

News & Interviews for Beyond The Hills

Critic Reviews for Beyond The Hills

Audience Reviews for Beyond The Hills

Beyond The Hills Quotes