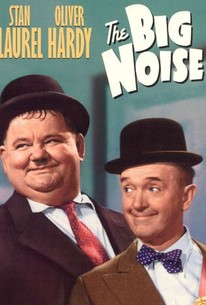 Stan Laurel and Oliver Hardy play janitors for a detective agency who pose as super-sleuths when they're hired to protect inventor Alva P. Hartley (Arthur Space). Moving bag and baggage into Hartley's gadget-laden house, Stan and Ollie must first contend with the inventor's bratty son Egbert (Bobby Blake, aka Robert Blake) and much-married Aunt Sophie (Esther Howard). More problems ensue when Hartley's next door neighbors Charlton (Frank Fenton), Hartman (James Bush), Dutchy (Phil Van Zandt) and Mayme (Veda Ann Borg) reveal themselves as the crooks they really are. Entrusted with Hartley's latest invention, super-bomb called "The Big Noise", Stan and Ollie skeedaddle to Washington, just one step ahead of the criminals. Escaping the villains, the boys take flight in a balky airplane, only to find that they're the targets for Army gunnery practice. Our heroes save themselves-and the day-when they use the bomb to destroy a Japanese submarine. Long regarded as the worst of Laurel & Hardy's feature films, The Big Noise has in recent years been championed by several of the team's fans, not least because the admittedly patchy storyline incorporates several of their classic routines from such earlier 2-reelers as Habeas Corpus, Wrong Again and Berth Marks. Arguably the film's best scene finds Stan and Ollie trying to gorge themselves on a "banquet" consisting of dehydrated food capsules.

Robert Dudley
as Grandpa
View All

Critic Reviews for The Big Noise

There are no critic reviews yet for The Big Noise. Keep checking Rotten Tomatoes for updates!

Audience Reviews for The Big Noise

There are no featured audience reviews for The Big Noise at this time.