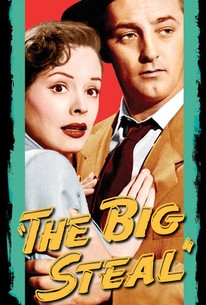 This breezy and unpretentious film noir from director Don Siegel starts off with fireworks. Duke Holliday (Robert Mitchum), an American army lieutenant, is on his way to Mexico by boat when he's confronted in his cabin by Blake (William Bendix), gun in hand, who plans on taking him back to the United States. Holliday gets away, pummeling Blake pretty hard in the bargain and stealing his identification, and crosses paths with Joan Graham (Jane Greer). It turns out that she's looking for the same man he is, a smooth-talking hood and grifter named Fiske (Patric Knowles), who took Holliday at gunpoint for 300,000 dollars in army payroll money and Graham for 2,000 dollars, in addition to her hand in marriage. They spend a lot of their time sizing each other up, not knowing how much to believe about the other while trying to catch up with Fiske, while Blake -- an army captain who's after Holliday for his alleged part in the robbery -- stumbles along a step or two behind them. These four end up playing cat-and-mouse across Veracruz, with Fiske always a half-step ahead, while police Inspector General Ortega (Ramon Novarro) calmly keeps tabs on all of them, trying to figure out (along with the rest of us) exactly who is on the level (in those days, especially after Out of the Past, there was no built-in assurance for audiences that Mitchum and Greer played characters with clean hands, and Mitchum is almost too good with the rough stuff here to be an obvious hero). Holliday and Graham engage in some surprisingly playful and suggestive banter during their travels, in between her keeping Holliday -- whose command of Spanish is less than minimal -- from adding too many new permutations to the phrase "the ugly American" in his dealings with the Mexicans. The mood is decidedly brisk and light-hearted at times, given the gunplay and violence that explodes at key intervals. The addition of John Qualen -- in one of the strangest roles of his career -- as a decidedly fidgety and neurotic presence in the last quarter of the story only adds to the undertone of quirkiness in this superb film noir.

Critic Reviews for The Big Steal

Audience Reviews for The Big Steal