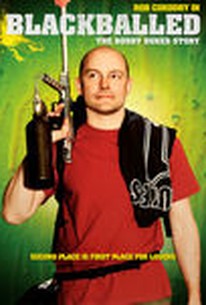 The original hitman of paintball returns to reclaim his rightful crown in the one comedy that proves you're never too old for a killer comeback. Everyone knows that the name Bobby Dukes (Rob Corddry) is synonymous with the game of paintball, and when the teenaged Dukes led his team, the River Rats, to three consecutive wins at the East Coast's legendary Hudson Valley Paintball Classic, it appeared as if the game was finally about to break big due in no small part to Dukes' dead-eye aim and easygoing charisma. It was that fateful attempt at a fourth win that ultimately derailed Dukes' career as a triggerman, though, and after being shot during one of his signature moves, the three-time champion committed one of the most heinous acts in all of paintball -- wiping. Spotted by a keen-eyed referee and subsequently ejected for his attempts to cover up the telltale stain, Dukes' was devastated to become the laughing stock of the paintball community. Now, the time has come to let go of the past and lay claim to the future, and though no self-respecting paintball player would be caught stained on the team of a man who once wiped, Dukes is soon joined by the very same referee who exposed his deceitful transgression in assembling a ragtag team of underdogs and once again laying claim to the coveted Hudson Valley Paintball Classic title.

There are no featured audience reviews for Blackballed: The Bobby Dukes Story at this time.