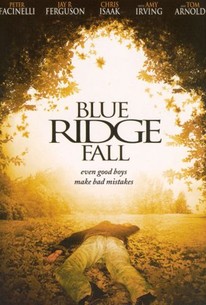 A group of teenagers try to protect a friend in need, only to fall into dangerous circumstances in this drama. Danny (Peter Facinelli), Taz (Will Estes), and Shane (Jay R. Ferguson) are three friends growing up in a small town in North Carolina. Danny is the star of his high school's football team and looks to have a bright future ahead of him, while Shane and Taz are good-time guys with a knack for getting into trouble. Aaron (Rodney Eastman) is a troubled boy from an abusive family whom Danny and his friends look after; one day, the domestic violence at Aaron's home reaches a flashpoint, and his father is found dead. Danny and his friends try to protect Aaron by covering up the evidence and keeping the matter quiet, but when one witness dies in an accident and two other people are found murdered, the boys begin to realize that they've gotten themselves in too deep, and Danny's once promising future may soon be a thing of the past. Blue Ridge Fall features a distinguished supporting cast, including Amy Irving, Tom Arnold, and Chris Isaak.

Will Estes
as Taz

Heather Stephens
as Carrie
View All

There are no critic reviews yet for Blue Ridge Fall. Keep checking Rotten Tomatoes for updates!

There are no featured audience reviews for Blue Ridge Fall at this time.