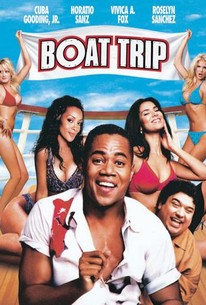 Boat Trip is a lame, juvenile farce that's heavy on stereotypes and desperate antics but short on brains and laughs.

Two guys looking for a respite from their bumpy romantic lives find themselves in the midst of a very confusing situation in this broad comedy. Jerry (Cuba Gooding Jr.) is a guy who thinks he's found the love of his life in Felicia (Vivica A. Fox), his beautiful longtime girlfriend. Jerry decides to propose to Felicia, and arranges for a hot-air balloon ride in order to create the ideal setting to pop the question. However, Felicia not only turns him down, she announces that she's leaving him for another man. Jerry sinks into a deep depression, until his best friend Nick (Horatio Sanz), who has been having his own romantic problems, suggests they take a vacation cruise on an ocean liner, forgetting their troubles while they make time with bikini-clad babes. Jerry is game, but after an angry misunderstanding with a travel agent, Nick and Jerry discover they've been booked on a tour specifically for gay men. Jerry and Nick are forced to pose as lovers to ward off the indefatigable advances of aging playboy Lloyd (Roger Moore), which cramps their style when the ship's captain rescues a boatload of buxom Swedish swimsuit models. Jerry's spirits rise when he meets Gabriella (Roselyn Sanchez), a beautiful dancer who is part of the ship's entertainment staff. Jerry, however, now has to walk a fine line between maintaining his cover and convincing Gabriella that despite outward appearances, he's not gay. Boat Trip was the first feature film from director Mort Nathan, best known for his work as a writer for television.

Vivica A. Fox
as Felicia

Will Ferrell
as Brian's Boyfriend (uncredited)

Phillip Krevoy
as Man on Deck

Thomas Lennon
as The Minister