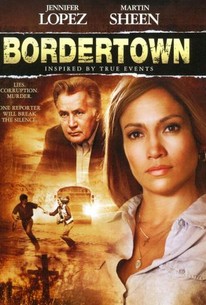 The celebrated Latino director Gregory Nava (American Family) helmed, scripted, and co-produced (with star Jennifer Lopez) Bordertown -- a suspense thriller with an A-list Hispanic cast. Lopez portrays Lauren Adrian, an American correspondent from a Chicago newspaper, who longs to cover the U.S. occupation of Iraq. Instead, Lauren's mentor at the paper, George Morgan (Martin Sheen) reassigns her to Mexico. She is promptly shuttled off to Juarez, a troubled community on the Texas-Mexico border rattled by a series of brutal, unsolved homicides. The victims -- all young women, employed in the maquilla plants that manufacture electrical components for exportation to the U.S. -- are uniformly found raped and strangled to death. One of those women, Eva, manages to escape her captors (who believe her dead) and flees not to the corrupt police, but to the local newspaper. There, her life intersects with those of Lauren and Lauren's former boyfriend and lover, the reporter Alfonso Diaz (Antonio Banderas). Suddenly, Lauren foresees, in the prospect of reporting Eva's story, an assignment that could bring her closer to Iraq than she ever dreamed possible. Sonia Braga (Kiss of the Spider Woman), Maya Zapata and Juan Diego Botto co-star.