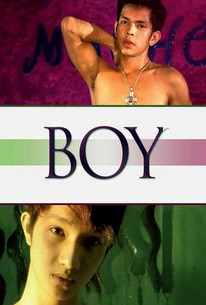 A budding writer discovers that money sometimes marks the dividing line between love and lust in this coming of age drama from Philippine director Auraeus Solito. A would-be poet (Aeious) in his late teens is coming to terms with the fact he's gay, though he tries to hide his attraction to men from his mother (Madeleine Nicolas), with whom he still lives. One night, the young man slips out to visit a gay bar, where he quickly becomes infatuated with a ruggedly handsome exotic dancer (Aries). The young poet discovers that the dancer turns tricks on the side, and is obsessed with the notion he could satisfy his sexual craving if he had enough money. The young man doesn't have the funds for a date with the dancer, but he's willing to sell his collection of rare comic books and action figures to raise the cash, and arranges for a date on New Year's Eve. But while the poet can't help but feel love for the dancer, the handsome rent boy is motivated by business, not emotions. Boy received its North American premiere at the 2009 Seattle International Film Festival. ~ Mark Deming, Rovi

There are no featured audience reviews for Boy at this time.