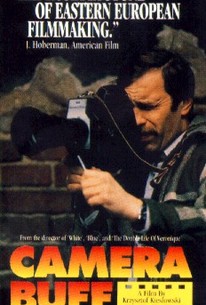 In this political satire from Poland, Jerzy Stuhr plays Filip, a factory worker who, after the birth of his first child, buys an 8mm movie camera to record his daughter's first few years on film. Before long, Filip is happily obsessed with his new hobby, and he graduates from simply capturing his daughter's activities to photographing practically everything around him. His movie mania attracts the attentions of his boss, who gives him a new task: making films that will give outsiders a clearer picture of how things work at their factory. However, Filip's ceaseless photography begins to drive his wife (Malgorzata Zabkowska) crazy, and she threatens to leave him, while his boss is not at all happy with Filip's films. They're quite good, earning television broadcast time and winning awards, but their messages don't conform with his party's political and economic agenda, and Filip is warned to soften the tone of his work or he'll lose his job. This dark comedy from director Krzysztof Kieslowski was released in the United States under the title Camera Buff.

Krzysztof Zanussi
as Himself

Krysztof Zanussi
as Himself

Andrzej Jurga
as Himself
View All