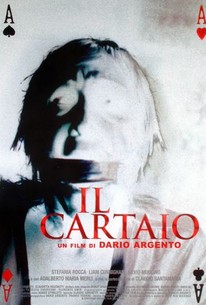 A serial killer with a knack for video poker and a taste for blood taunts a determined policewoman in director Dario Argento's attempt to bring the traditional giallo into the digital age. Detective Anna Mari (Stefania Rocca) is sitting at her desk when a message from an anonymous online gambler bearing the moniker "The Card Player" invites her to join a game of video poker. When the game screen loads, Mari is horrified to learn that the stakes of the game are higher than she ever could have imagined, as an unidentified female in an over-pixilated web-cam window screams for her life. Though the chief initially refuses to take part in the killer's horrifying game, the death of the innocent victim leads Mari to seek more unconventional means of tracking the murderous gambler. As the killer continues to taunt police, British policeman John Brennan (Liam Cunningham) is brought in to help solve the case. When the killer ups the ante by kidnapping the police chief's daughter, it's only a matter of time before the killer and Mari herself are locked in a pulse-pounding, life-or-death game in which anyone could hold the winning hand.

Carlo Giuseppe Gabardini
as Anti-Hacker No. 1

Alessandro Mistichelli
as Anti-Hacker No. 2

Francesco Guzzo
as Anti-Hacker No. 3

Irene Quagliarella
as Friend of the Second Victim

Isabella Celani
as Doctor
View All