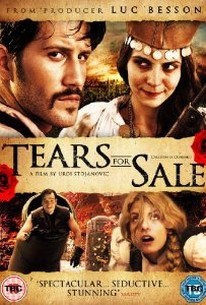 Serbian director Uros Stajanovic's gender-themed period allegory Charleston and Vendetta unfurls in Pokrp - a rural village in the 1920s-era Balkans - where nearly the entire male population (save one individual) has been decimated by the ravages of war. This leaves untold number of love-starved female residents craving male companionship; when sisters Ognjenka and Boginja accidentally kill off the last male, execution by the other female members of the village is a near certainty. The siblings receive a second chance, however, in the form of an ultimatum: they must set out on a quest to retrieve one virile male and bring him back to the village. If they can succeed in this task, their lives will be spared. Thus, the women embark on a journey into the surrounding country; en route they happen upon such discoveries as the lusty and lascivious Dance Hall King of Belgrade and an impossibly vain muscleman. ~ Nathan Southern, Rovi

Elizabeta Djorevska
as Mara the Drunkard

Fedja Stojanovic
as Jordan the Corporal

Erol Kadic
as Ozren the Coppersmith

Milos Vlalukin
as The Groom

There are no critic reviews yet for Tears for Sale (Carlston za Ognjenku). Keep checking Rotten Tomatoes for updates!