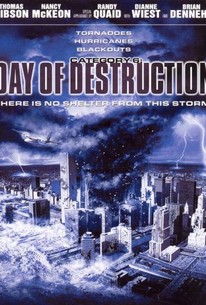 Of all of the ways humankind can destroy the planet, none can hold a candle to the awe-inspiring and earth-shattering power of Mother Nature. As chief meteorologist for the National Weather Service's Storm Prediction Center, Andy Goodman (Brian Dennehy) has seen his share of storms. Now, just days shy of his eagerly anticipated retirement, Goodman is disturbed to discover three separate storm fronts approaching Chicago: a cluster of tornados from the west, a warm storm front from the south, and an Arctic system from the north. As Goodman enlists the aid of his longtime storm-chasing friend "Tornado Tommy" (Randy Quaid) in tracking the storms, ambitious Chicago television reporter Amy Harkin (Nancy McKeon) is busy researching the mysterious drought and record heat wave that has plagued the city for nearly six weeks. Though the citizens of Chicago are warned to reduce their energy consumption by secretary of energy Shirley Abbott (Dianne Wiest) the Windy City is thrust into darkness when severe thunderstorms destroy the city's main power-generating plant. With no means to warn the outside world of the dangers fast approaching, Harkin and Midwest Electric chief of operations Mitch Benson (Thomas Gibson) must race against time to get the word out to citizens and emergency workers before the snowballing blackout causes a complete collapse of the entire North American power grid.