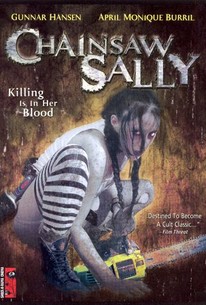 An outwardly timid, small-town librarian who was forced to watch as her parents were brutally butchered sets out to punish the murderers responsible for the heinous crime in a blood-drenched tale of revenge featuring appearances by horror legends Gunnar Hansen and Herschell Gordon Lewis. Sally Diamon was just ten years old when her parents were slaughtered right before her very eyes, and to this day she can still hear them screaming when she lies down to sleep. In the wake of that gruesome crime Sally was forced to raise her younger brother to the best of her abilities. These days the locals around Porterville know Sally as a quiet and considerate girl, but what do the locals know? When the sun sets over Porterville the girl who seems so well-mannered during the daytime hours basks in grisly images of torture and violence - longing for the day that she will tear at the flesh of the men who took her parents. It seems that with each passing day the fire in Sally's eyes grows brighter and more intense. Tonight, under the shroud of darkness, the young girl will finally give in to the bloodlust that has threatened to consume her body and soul as she sets out to rid Porterville of evil by acting as judge, jury, and sadistic executioner.