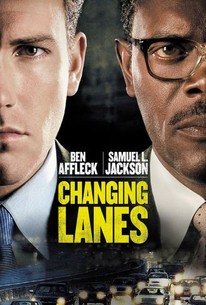 Though some may find its conclusion unsatisfying, Changing Lanes is a tense, well-crafted exploration of meaty ethical dilemmas.

Director Roger Michell follows up the hit romantic comedy Notting Hill (1999) with this thought-provoking thriller. Ben Affleck and Samuel L. Jackson star, respectively, as Gavin Banek and Doyle Gibson, two New York men whose lives become accidentally intertwined in a Good Friday fender bender on the FDR Drive. Late for a crucial appointment, hotshot lawyer Gavin tosses Doyle a blank check and leaves the scene, while Doyle, whose car is inoperable, is late for a court-appointed custody hearing. A recovering alcoholic, Doyle's tardiness doesn't sit well with the judge, who - sick of waiting for Gipson - grants custody to Doyle's ex-wife in Doyle's absence. The situation worsens when it becomes evident that Doyle has an equally important file belonging to Gavin, which proves that an elderly man gave Banek's firm power-of-attorney over his foundation. So begins an escalating war of words and deeds between the two men. Soon, egged on by an associate (Toni Collette), Gavin hires a "fixer" (Dylan Baker) to destroy Doyle's credit, forcing Doyle to fire back with some cunning moves of his own. Changing Lanes co-stars William Hurt, Sydney Pollack, and Toni Collette.

Noel Wilson
as bartender at Arlo's

Julia Gibson
as Receptionist at AD&S

Caleb Archer
as Kid on a Bike

Shabazz Richardson
as Cop at Precinct

Father Bonneau
as Himself

Howard I. Laniado
as Barry