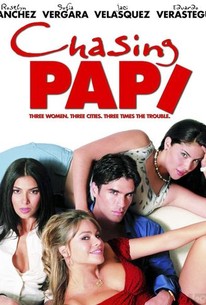 Obnoxious in tone and unable to provide its trio of stars a decent quip, Chasing Papi will have audiences running in the other direction.

A man learns the hard way that, when it comes to women, three is more than a crowd in this frantic comedy. Tomas Fuentes (Eduardo Verástegui) is a successful advertising man living in Los Angeles who has a way with the ladies. Almost too much of a way, in fact, since he's currently dating three beautiful women in three different cities: Lorena (Roselyn Sanchez), a bright and attractive lawyer living in Chicago; Cici (Sofía Vergara), a cocktail waitress from Miami with a fiery personality; and Patricia (Jaci Velasquez), a New Yorker looking to get out from under the domineering shadow of her mother. As it happens, all three women are fans of noted television astrologer Walter Mercado, and on his advice, they each decide to take a bold step in their relationships and visit Tomas in L.A. Needless to say, the women are enraged to discover Tomas' rather spectacular infidelity, but that turns out to be the least of his problems after a mixture of booze and tranquilizers lands him in the hospital, a pair of crooks (D.L. Hughley and Freddy Rodriguez) kidnap him, and he discovers Cici and Patricia are wanted by the law. Produced under the title Papi Chulo, Chasing Papi was the first feature film from director Linda Mendoza after an extensive resume of credits in television comedy.

Walter Mercado
as Himself

Carlos Ponce
as Himself

Mariette Areco Detotto
as Herself

Theresa Barbosa-Adams
as Club Dancer No. 1

Nicole Pantenburg
as Club Dancer No. 2

Joaquin Escamilla
as Club Dancer No. 3

Marcos Santana
as Club Dancer No. 4

Ariana Muratti
as Club Dancer No. 7

Tita Guerrero
as Club Dancer No. 8
View All