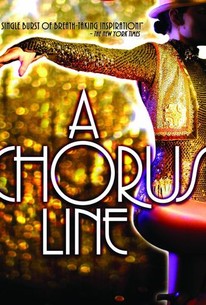 On stage, A Chorus Line pulled back the curtain to reveal the hopes and fears of showbiz strivers, but that energy and urgency is lost in the transition to the big screen.

Broadway's celebratory musical about rejection makes it to the screen in a fizzless adaptation by Richard Attenborough that misses the whole point of the Broadway show -- i.e. the dancing and the dancers. Instead, the dancers become a limp Greek chorus for the dead love affair between a choreographer, Zach (a pre-Gordon Gekko Michael Douglas) and his old flame, Cassie (Alyson Reed) the star dancer. Zach is holding try-outs for a new Broadway musical and, as armies of dancers are brought on stage to audition for Zach, he sits in the darkened recesses of the theater, puffing on a cigarette, as he winnows out hopeful dancers who want to become part of the chorus line for Zach's new show. Finally, Zach has reduced the dancers to 16 men and women, and he asks each of them to step to the footlights and tell him about their lives and their dreams. But backstage, while the dancers are confessing their pasts to Zach, Zach's past walks through the stage door. Cassie, Zach's ex-lover, whom Zach met, courted and broke up with in the theatrical environs, has returned. Once a big star, Cassie has returned to the theater -- not to see Zach but to audition for Zach's musical. She needs the work.

Timothy Scott
as Boy with Headband

Peter Fitzgerald
as Dancer with Gum

Critic Reviews for A Chorus Line

Audience Reviews for A Chorus Line