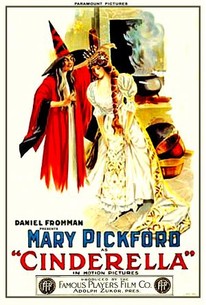 Combining the star appeal of Mary Pickford with this fairy tale seemed like a sure thing to Famous Players-Paramount. Releasing it around Christmas time just about guaranteed big box-office receipts. But except for a few inspired moments (in one, the clock's hands strike 12 and promptly shrivel up), the picture is disappointing. Perhaps Cinderella was too passive a role for Pickford's normally high-spirited approach; her performance here is flat. The photography, too, is poor, and trade paper Variety suggests that the studio rushed through filming to get that all-important holiday release. The story is really far too well known to relate, but in any case here's a brief recap: Cinderella is mistreated by her nasty stepmother (Isabel Vernon) and two homely stepsisters (Georgia Wilson and Lucille Carney). But when Prince Charming (Owen Moore, Pickford's then-husband) throws a ball, she manages to make it there with the help of a fairy godmother (and a few handy dissolves -- they were many decades away from computer effects in 1914). But when the clock strikes 12, Cinderella dashes home, losing her glass slipper along the way. The prince searches all over for the shoe's owner, finally places it on Cinderella's dainty foot and they "live happily ever after." Pickford's marriage to Moore, however, ended in divorce by the end of the 1910s and she married Douglas Fairbanks, who, for quite a long while, was a real-life Prince Charming (although, unfortunately, their marriage didn't last, either).

There are no critic reviews yet for Cinderella. Keep checking Rotten Tomatoes for updates!

There are no featured audience reviews for Cinderella at this time.