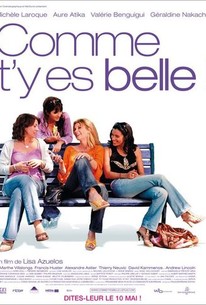 Four Jewish women juggle love, sex, new relationships, work and parenthood in this romantic comedy from France. Isa (Michele Laroque) has split with her husband, and is busy looking after their three children while running her business, a beauty salon. While Isa has precious little spare time, she's trying to make room in her life for a British businessman who has struck her fancy. Alice (Valerie Benguigui) is Isa's sister, and has come to envy her sister's single status after a few years with her husband Gilles (Alexandre Astier), who appears to hate personal grooming as much as he loves golf. Alice's misgivings about her marriage grow stronger when she becomes friends with a handsome and charming divorced dad. Lea (Aure Atika) has recently parted ways with her husband, and devotes her days to pampering herself when she isn't taking care of her child. And Nina (Geraldine Nakache) has never been married and is looking for a man to settle down with, but she lacks confidence about her appearance even though she's young and pretty. Comme T'y es Belle (aka Hey Good Looking) was the second feature from director Lisa Azuelos, and was a major box office success in France. ~ Mark Deming, Rovi

There are no featured audience reviews for Gorgeous! (Comme t'y es belle!) at this time.