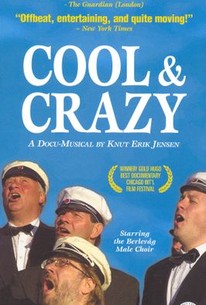 Berlevag is a small city in the far north of Norway. The town has fallen on hard economic times in recent years, and many of the city's younger citizens have moved away in hopes of finding a better life elsewhere, but Berlevag still has one thing it can point to with pride -- the Berlevag Male Choir, a men's chorus that has found acclaim both at home in Norway and on concert tours overseas. Heftig Og Begeistret is a documentary directed by Knut Erik Jensen that offers an inside look at the men of the choir, whose vocalists range in age from students in their early twenties to one man in his mid-nineties, as well as the city that brought them together. Heftig Og Begeistret shows the choir performing at home in Berlevag (often outdoors, regardless of the weather), as well as on tour in Russia, where they are received with wild enthusiasm. Despite its subject and approach, neither of which would seemingly guarantee a hit at the box office, Heftig Og Begeistret turned out to be a surprise box-office success in Norway, and was warmly received at the 2001 Gothenburg Film Festival in Sweden.

Critic Reviews for Cool and Crazy

Audience Reviews for Cool and Crazy

There are no featured audience reviews for Cool and Crazy at this time.